Reliable precipitation forecasts are critical for civil protection and societal activities. Rainfall forecasts can be used for protection of low-lying areas from flooding and prevention of sewer overflowing. On the other hand, transportation authorities can prepare in advance for heavy snow or icing. Early warnings of thunderstorms (and associated strong winds and hail) are imperative for air traffic safety. Aside from severe weather, coordination of renewable power generation (e.g.\ solar and wind and hydro) can be done more efficiently by utilizing weather radar data in real-time forecasting systems. 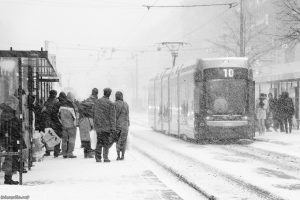 In the above applications, the typical time scale is from a few minutes to three hours, and a very high spatial resolution is needed. Forecasts can be generated via two different approaches. In the first one, the computation is done in a grid covering the whole domain. The second one is based on tracking and modeling individual rain cells. Generation of short-term forecasts, called nowcasts, is done by extrapolating radar measurements. This is done by estimating the motion of precipitation areas. Uncertainties in the nowcasts are simulated by adding stochastic perturbations, which produces an ensemble of nowcasts from which probability distributions of precipitation intensities are estimated. 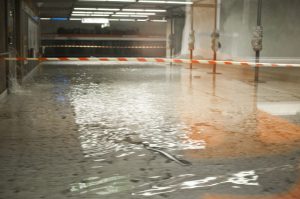 We have been involved in various domestically and EU-funded nowcasting projects. In PNOWWA, we demonstrated the use of probabilistic snowfall nowcasts for aviation purposes. Our nowcasting methods have been used in various EU-funded civil protection projects to enhance early warnings of severe rainfall and flooding. Our international collaboration also includes high-resolution nowcasting in urban areas done with Colorado State University, as well as open source software initiatives with MeteoSwiss. We are also closely collaborating with the FMI operational weather services in deploying new nowcasting methods. 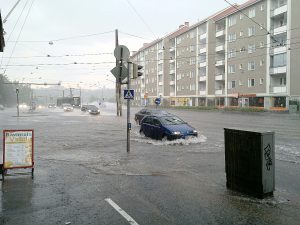 Flood in Helsinki. Photo by eujmhs.