A major international field campaign of greenhouse gas in-situ measurements took place at Sodankylä in June. During the two-week period more than 20 accurate profile measurements of major greenhouse gases were made involving an effort of several research groups from Europe and the US.

Recently AirCore, a new measurement technique, has become available, which allows accurate measurements of some of the key trace gases at different altitudes in the atmosphere. The novel measurements of CO2, CH4, CO and other gases are using a meteorological balloon as a platform to lift the research instrumentation from the surface up to the altitude of 30–35 km.

“The AirCore method allows measurements above typical aircraft flying altitudes,” says Rigel Kivi, Senior Scientist at the Finnish Meteorological Institute. “In addition, we run a ground-based Fourier Transform Spectrometer (FTS) at the same site where the AirCore measurements are taken. The FTS instrument is recording direct solar spectra in the near-infrared spectral region. From these spectra, accurate and precise column-averaged abundance of CO2, CH4, N2O, and other gases are retrieved. Our FTS instrument in Sodankylä has been operational since early 2009 and is participating in the Total Carbon Column Observing Network (TCCON),” Kivi continues.

This new type of in-situ measurement is now being increasingly used in climate change studies and also for the validation of ground-based and space-based remote sensing instruments. During the campaign, greenhouse gas satellites have targeted Sodankylä for coordinated measurements from space. 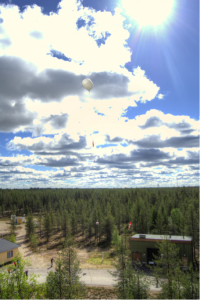 The current greenhouse gas satellite missions include recently launched European Space Agency’s Sentinel 5P TROPOMI, NASA’s OCO-2, GOSAT from Japan and TanSat from China. The participants of the recent AirCore Campaign in Finland included scientists from the Finnish Meteorological Institute, Groningen and Utrecht University in the Netherlands, University of Bern in Switzerland, University of Frankfurt in Germany, Laboratoire des Sciences du Climat et de l’Environnement in France, University of East Anglia in the UK and from the NOAA Earth System Research Laboratory in the US. The campaign also attracted visitors from the Chinese Academy of Sciences, Institute of Atmospheric Physics.