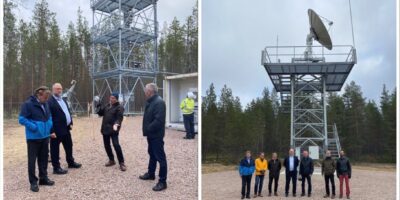 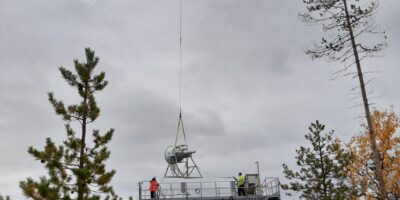 Seven researchers from Edinburgh University, Northumbria University Newcastle and the WSL Institute for Snow and Avalanche Research (SLF) Switzerland recently visited FMI-ARC as a part of the INTERACT Transnational Access initiative. The main objective of the visit was to collect extensive measurements of solar and thermal radiation patterns and associated forest structure affecting snowmelt in forests.

Bright, cold snow, and dark, warm forests create strong spatial and temporal varied snowmelt patterns. Forests absorb solar radiation and shade the snowpack in places, reducing both snowmelt caused by solar radiation as well as the reflectivity of the land surface, whereby the solar radiation is absorbed by the forest above instead of being reflected by the bright snow below. At the same time, the solar radiation warms the forest, which then emits thermal radiation to the snowpack, increasing snowmelt. The combination of these phenomena creates radiation “hot” and “cold” spots very close together within forests. These differences are not well represented in forest snowmelt models, in part, due to a lack of data availability for model development.

Solar and thermal radiation is typically measured using small radiometers, but placing these instruments in a single location in the forest means the radiation differences between the “hot” and “cold” areas are not measured. New technologies of moving radiometers, developed over the last three winters in Davos, Switzerland have meant we can now measure these variabilities and use these to improve snowmelt models. Within the forest, these technologies include a hand-held gimbal stabilized platform and an automated cable car that allow spatial radiometer measurements. Above the forest, an unmanned aerial vehicle (UAV) is used for the same purpose.

The hand-held radiometer set up was carried along gridded transects in the forest (see https://doi.org/10.1175/JHM-D-18-0158.1). Repeat measurements within 50 x 50 meter grids mean radiation variabilities in both space and time are captured. The automated cable car measured both radiation from the sun and trees, but also what was reflected and emitted from the snowpack (see https://doi.org/10.1029/2018JD029908). The cable ran continuously along a 60m transect through the forest, measuring how tree shadows develop of the course of a sunny day. The UAV was fitted with up and down-looking solar radiometers and was flown above the forest (see https://doi.org/10.1029/2018JD029908). Repeat flights along the same path with the UAV measured how the dark forests and bright reflective snowpack change the reflected radiation in both space and time. This was the first time these methods have all been used together at the same time and location.

Forest snowmelt models can only be improved if they specifically account for forest structure to simulate radiation at the snow surface. To this end, Terrestrial Laser Scanning (TLS) was utilized to measure forest structure at high spatial resolution, while another UAV was used to take areal images over larger forested areas for use in 3D structure-from-motion (SfM) calculations of forest height.