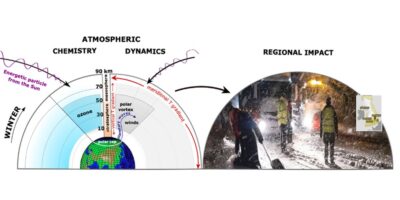 A unique and unprecedented insight into the night-time atmosphere above the Martian surface has been made possible by reconstructing the complete parachute descent and airbag landing of Pathfinder using models of the atmosphere and terrain. The results provide a complementary perspective on the behaviour of fast moving winds, or jets, in the Martian night-time atmosphere that have so far been characterised from the surface using meteorological instruments aboard InSight and Perseverance.

Pathfinder landed on Mars in 1997 and has been the only mission to descend and land at night. Therefore it provides an opportunity to study the night-time Martian atmospheric boundary layer above the surface.  During its parachute descent it passed through the boundary layer which is several hundred metres deep at night. Shortly before firing its braking rockets, still high above the surface, the lander was caught in what has been interpreted as a region of strong wind shear.

The boundary layer is important on Mars and Earth because it is a layer that controls the transport of material, e.g. dust, water vapour, gases, between the surface and the planet’s global circulations. Characterisation of small-scale processes in the atmospheric boundary layer, such as wind shear and turbulence, are important for enabling accurate atmospheric modelling.